The not so ordinary wedding of couple no.14 – Jaina and Jeevan 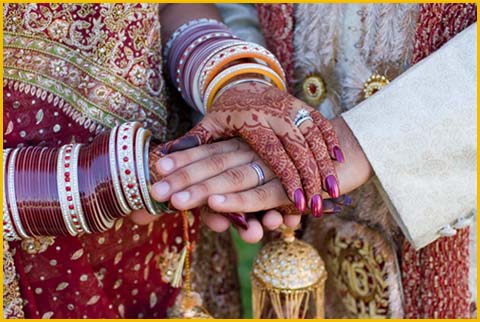 They say marriages are made in heavens and solemnized on earth.

Some go for a lavish wedding and spurge millions.

The unprivileged ones, who could not afford to spend, choose to get married in a community marriage ceremony.

At a community marriage dozens of couple get married, and the cost of function is borne by a third party.

The couple was engaged for the last two years, but couldn’t marry as Jaina’s father, an auto rickshaw driver, could not afford the marriage bills.

The groom Jeevan, who has studied till class Vth, works at an officer’s bungalow and earns Rs 7,500 per month.

One of the major excitements of Jaina, who has studied till XI, is that their marriage along with 40-45 couples is attended by Gujarat Chief Minister Anandiben Patel.

“How many girls get a chance to get married at a function and be blessed by the chief minister?” Jaina told Indian Express.