Nothing succeeds like success, they say. And if you have succeeded like King Khan aka Shah Rukh Khan then chances are that your casual doodle can go under the hammer and fetch few lakhs or may be more.

Well, this is all real. SRK, during his 1997 visit to Paris – the city of love, made a black and white doodle. The sketch emerged from the personal collection of a movie critic, will go under the hammer at Osian’s The Greatest Indian Show On Earth 2 in a five-star hotel on June 22 in Mumbai. The art piece could fetch anything above Rs 2 lakh.

SRK’s sketch, having his vision for the city of romance with Bollywood masala, includes — the Bastille, the Concorde, Voltaire, the French Revolution, the French connection, King Kong climbing the Eiffel Tower with the damsel in distress. It also has a pair of lips, his possible tribute to French kiss. 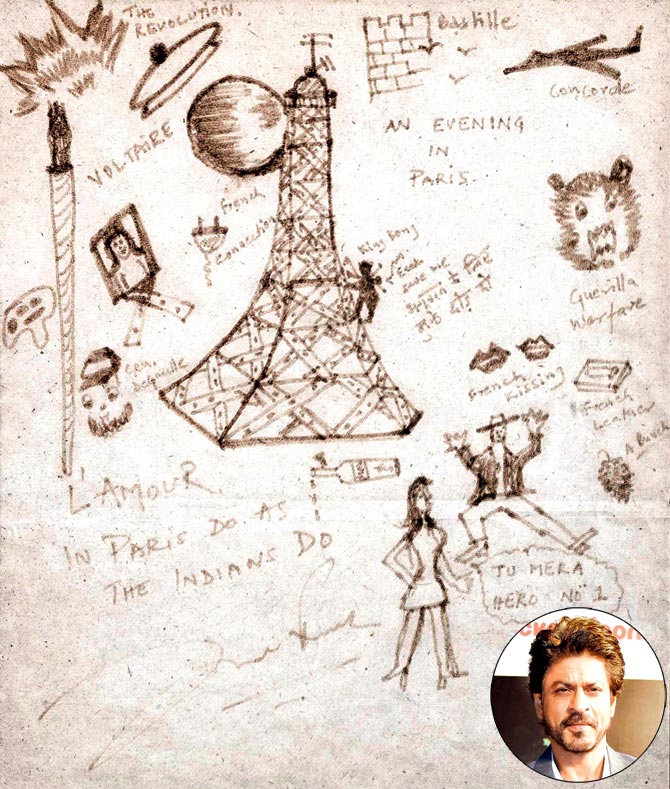 A girl uttering Tu Mera Hero No 1 to a boy, damsel in distress shouting “Bhagwan ke liye mujhe chhod do” was Shah Rukh Khan’s Bollywood addition to his vision to the capital of France. King Khan singed the sketch as “ In Paris do as Indian’s do.”

“The rare sketch is more like a doodle-cum-drawing of Shah Rukh’s visit to Paris. It provides a unique insight into the mind of a cinematic superstar in the making. Though estimated conservatively between Rs 1.2 lakh to R1.80 lakh, it is expected to sell for more.” Osian founder-chairman Neville Tuli told Mid-Day.